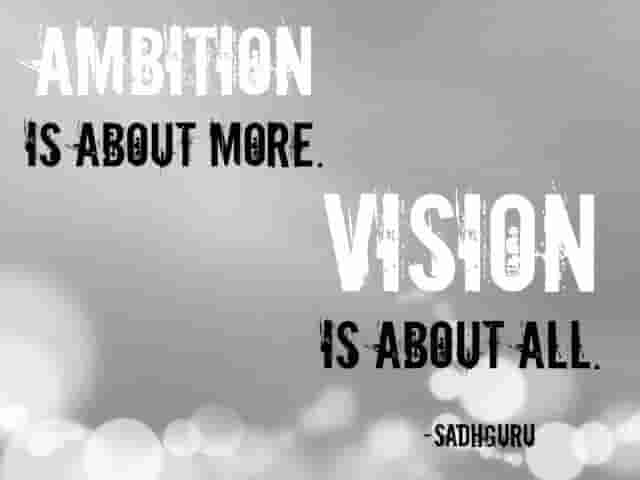 It is only a few people, who have made it to a certain level
of success in their life, whose desires get labeled as ambition
by someone else. But everyone is ambitious in his own limited
ways of thinking. A beggar is also ambitious, a rickshaw puller
is also ambitious. It is just that right now he is driving someone
else’s rickshaw, and his ambition is to someday own his own
rickshaw, which is not a small jump; it is a big jump in his
view. He thinks he is just thinking of his needs and he looks
at you and thinks you are ambitious, but it is not so. He is also
ambitious in his own limited way. Compared to you, his desire
or his ambition looks so limited, so it seems to be categorized as
something different, but it is not different.

Sometime ago, I was addressing the House of Lords in the
UK. The subject we were talking about was “Sustainability: is
consciousness the key?” When we look at the way our ambitions
are designed and structured right now, if you look at the larger
world today, everyone is aspiring for whatever they think is a
better way of living. Today, a lot of people across the planet
are aspiring to a lifestyle similar to that of an average American
citizen. Every nation is trying to provide that for their people.
The Living Planet1
– which has become an authoritative source
of ecological information – says that if seven billion people on
the planet achieve the lifestyle of an average American person,
we will need 4.5 planets. But we have only one. So this kind
of ambition is self-destructive. This kind of ambition is going
to lead us to a disastrous situation. When we carry on with this
form of ambition, we can only wish that at least half the people
should never succeed. If someone comes to you, you must be
able to freely bless him with success in whatever he desires, but
now the way it is going, we have to wish, “Let them fail.”

In 2008, when I went to the World Economic Forum,
everyone was in deep depression because the recession had just
hit. Everyone was carrying a long face and many chins were
dragging on the floor. They gave me a subject to speak on –
“Recession and Depression.” The room was full of people, and
everyone wanted to know how to beat the depression. I said,
“Recession is bad enough, you don’t have to also get depressed
now.”

If every human being, instead of working with an individual
ambition – which is bound to be in conflict with someone else’s
ambition – if we work with a larger vision, then there is no need
to scale down anything. Anyway you want wellbeing. All I am
saying is, why are you stingy about your desires? Why don’t you
be magnanimous? Why don’t you be infinite in your desires? It
is not just about “I want to be well.” “I want the whole world
to be well. I want the whole existence to be well. I want all life
to be well.” I want you to be really greedy with your ambition.
Whatever is your ambition for yourself, extend that to the whole
of humanity or to all life forms on this planet. Then there is no
need to scale it down. I am telling you, up it, don’t bring it down.
Right now the problem is that you have brought it down.

When we say ambition, ambition is just an exaggeration of
the existing. When we say vision, as the word suggests, it is
about a new possibility – something which is not yet. Ambition
is about wanting to take as much as we can take. Vision is about
making everything yours. One is an aggressive way of taking
it, another is an embrace. Trying to take a piece of the world,
and making the world yield to you willingly, are two different
dimensions of life.

All this philosophy, is it possible for a businessman? It is
very much possible and not only possible; it is especially needed
for the businessman because business is about expansion. Does
expansion happen because of inclusiveness or does it happen
because you forcefully take something? If you forcefully take
something, you will never expand to your full capacity. Only if
you learn how to make the world yield to what you want it to be,
can you take it all. Ambition is about more, vision is about all.

There is a beautiful story in the Indian lore. A monkey goes
into a house and finds a jar full of nuts. He puts his hand inside
and takes a handful of nuts. It is a very narrow-necked jar so the
hand will not come out – it is stuck. The monkey has to let go of
some nuts, but it is ambitious. It cannot let go of even one nut.
He pulls and pulls, but the hand does not come. Then, another
wise monkey comes – some monkeys are wise, you know. The
wise monkey says “This is not the way. Leave the nuts.” And
together they overturned the jar and all the nuts fell out. We have
to move from “more” to “all.” If you journey from “more” to
“all,” that means you have travelled from “ambition to vision.” Quotes on Dog – A trustworthy pet.

“A dog starved at his master’s gatePredicts the ruin of the state.” Blake A dog is the only thing on earth that loves you morethan himself. JoshBillings A living dog is better than a dead Read more… “The artist is a lover of nature; therefore he is her slaveand her master.“ —Ravindranath Tagore